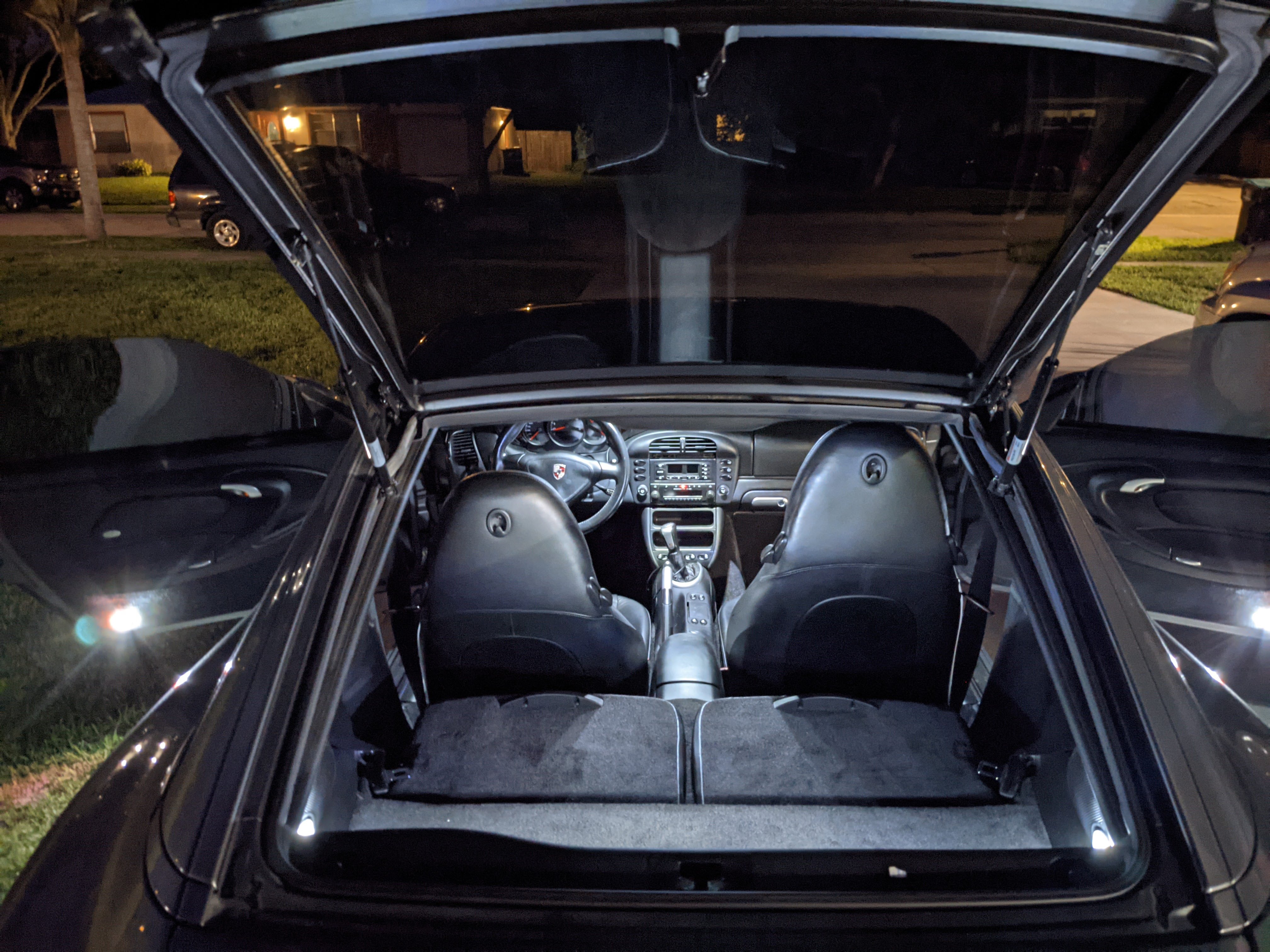 I recently got another car, my 15th car ever. It’s a 2002 Porsche 911 Targa with a 6-speed manual transmission. This has the rare Targa top, of which Porsche only produced about 5,000.

First mod is usually LEDs, but for me I actually disabled the chirping alarm first. 911s have a super finicky alarm system, and it’s complicated to fix and involves checking and likely replacing six sets of sensors. If any sensor is bad, the alarm beeps at you every every 10 seconds while the car isn’t on and the door is open. It’s pretty annoying. So I just unhooked the horn.

Anyways - LEDs. I actually had all the LEDs I needed in stock already, since this is my maybe 10th LED swap I’ve done? Took about an hour to knock them all out, which included fixing a fuse and doing this at night with a flashlight in one hand. A plastic trim piece removal tool was super helpful

Everything is pretty simple, just use a trim removal tool and go slowly. Get your polarity correct - if an LED is installed backwards, it won’t light up (but it also won’t blow a fuse). So just reverse the orientation to fix it. 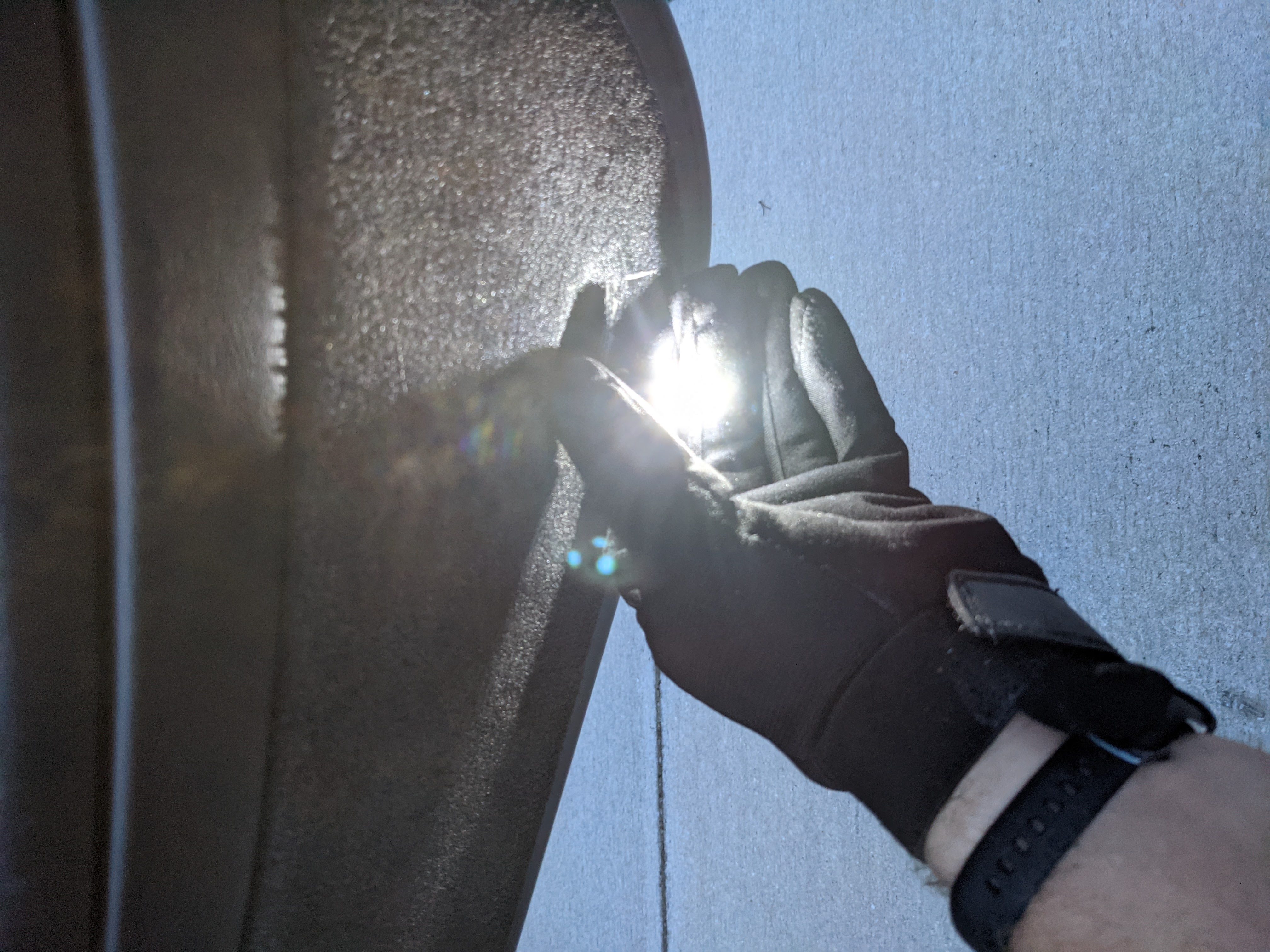 The map lights are a little unique. You have to remove the whole assembly, then each bulb has its own conductive socket that you remove. That’s the first time I’ve seen that. My map light/center thing had some plastic clips break, hey, it’s 19 years old, so I added some velcro around the edges and the top to keep it secure. 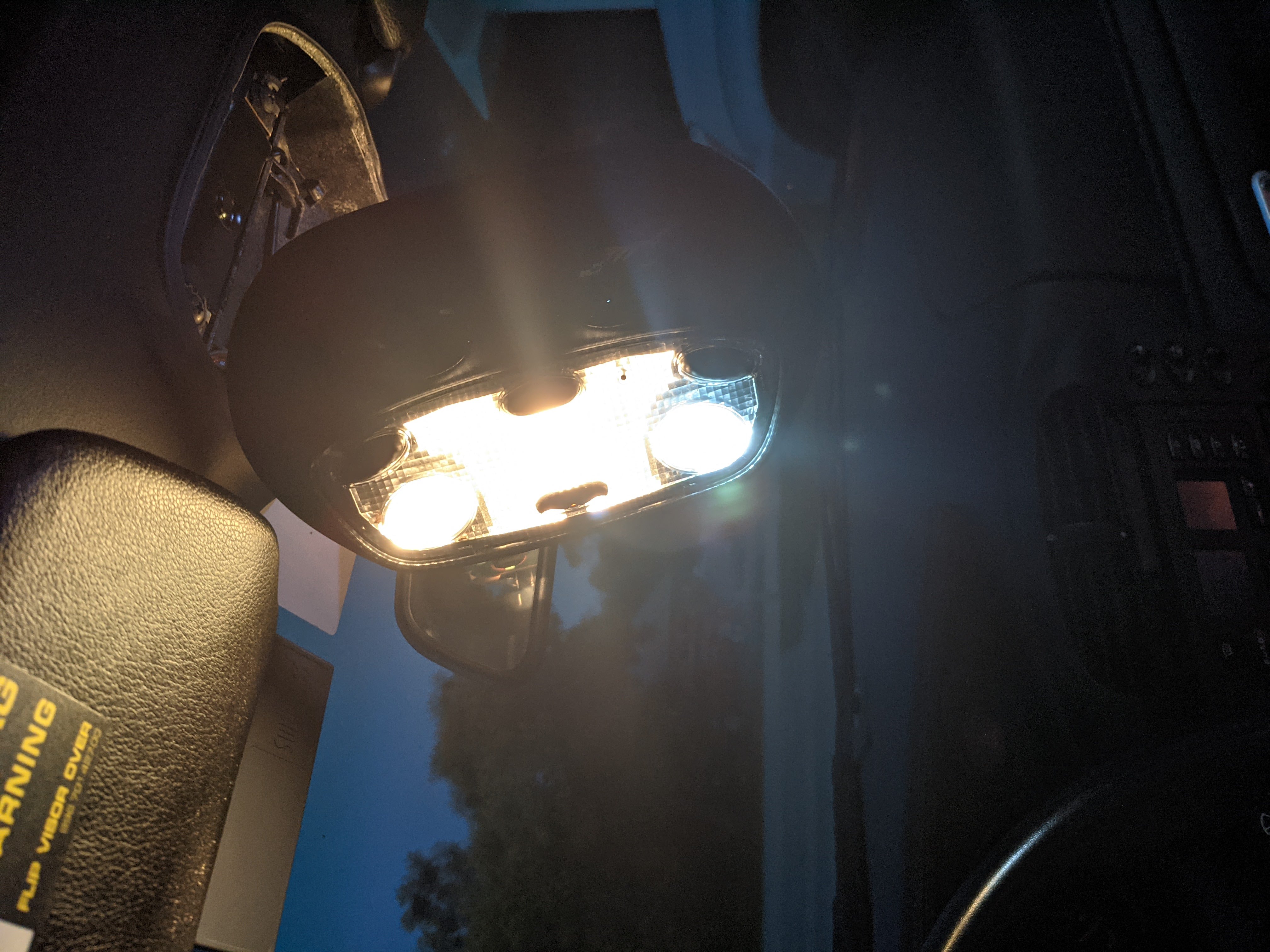 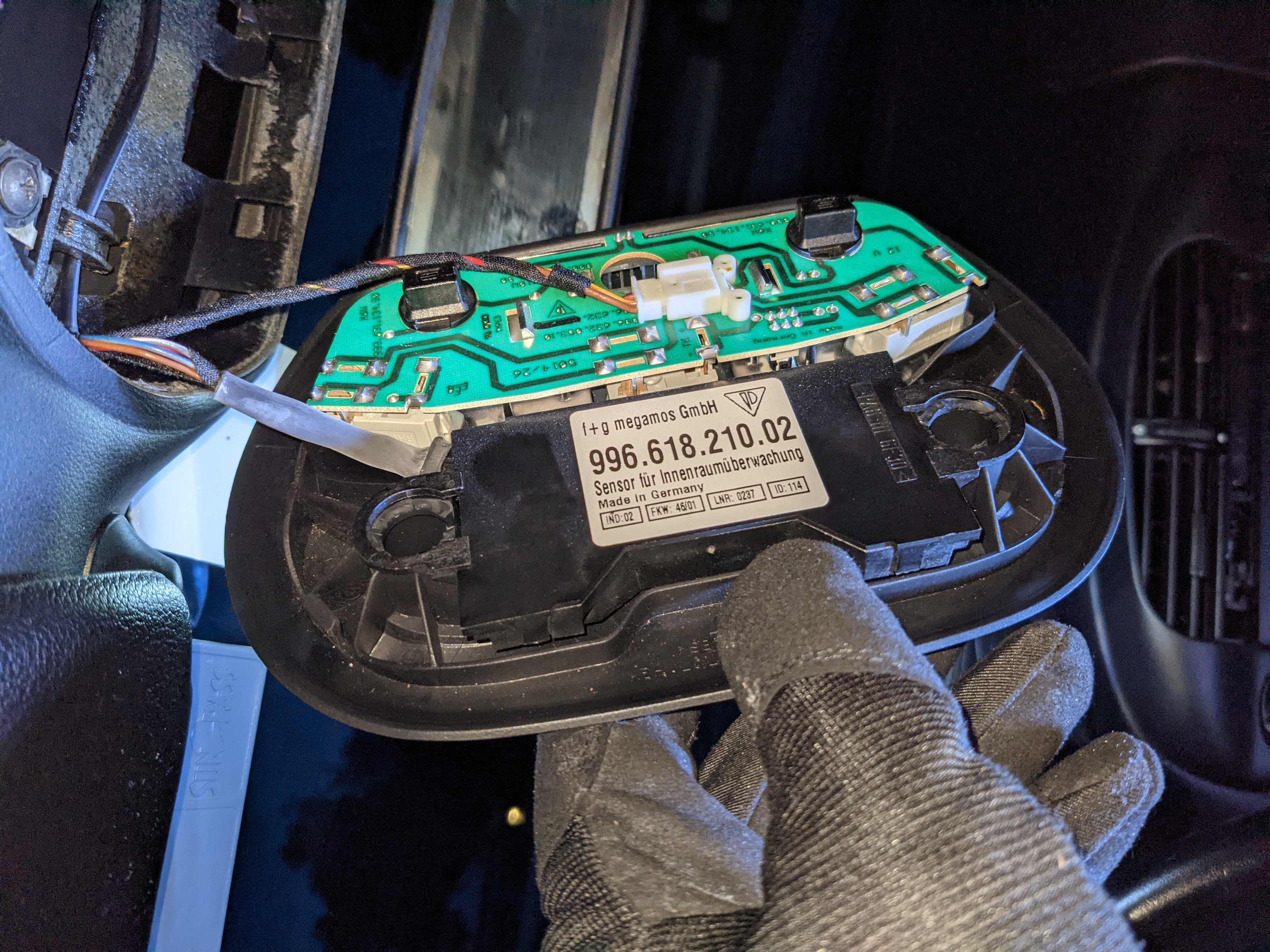 I finally blew the fuse by touching 2 pieces of metal together on the bulb, on the final bulb in the glove box. To fix it, find your fuse panel, located where the drivers left foot would be when driving. The fuse for interior lights is C3, which is the third row down, third fuse over. It’s a blue 15A, and I verified that one blew, tossed in a new 15A fuse, and the lights sprung back to life. 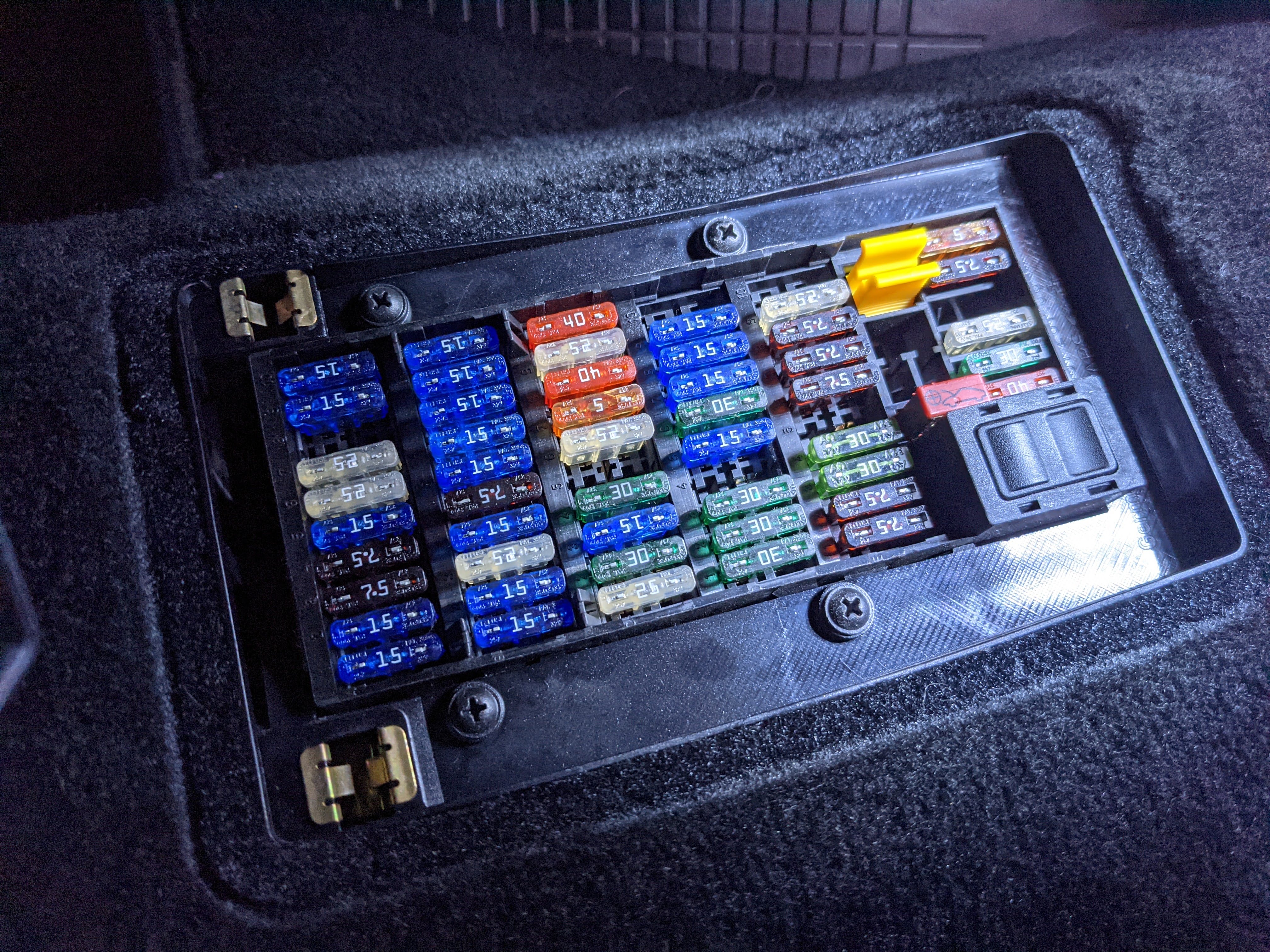 And that’s all there is to it, now the 996 Targa looks a bit more modern! Another guide to install these, with more pictures and details, is here.