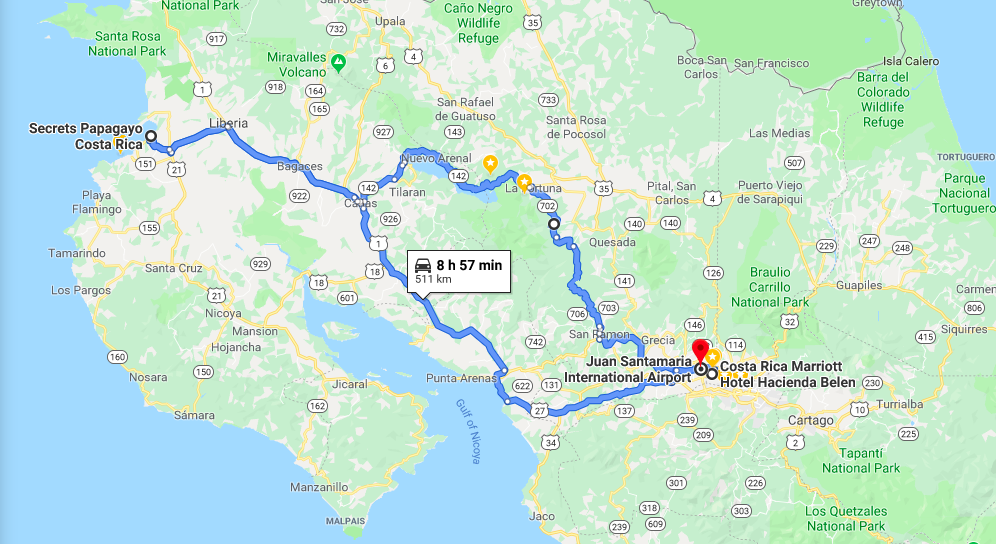 My wife, Elizabeth, and I got married on May 26, 2019, and left for our honeymoon to Costa Rica the next day. We drove from Melbourne, FL to Ft Lauderdale, FL to fly on JetBlue. A direct flight from FLL to SJO, it was about $500 for both of us, and bags were included with my JetBlue credit card. We spent 7 days and 6 nights in Costa Rica, and visited 5 provinces: San Jose, Alajuela, Guanacaste, Heredia, and Puntarenas.

We rented a Toyota Land Cruise Prado (the Toyota version of my Lexus GX470) from National Rental Car in San Jose, but not at the airport. The pickup location was Hotel Marriott Costa Rica, which was about 10 minutes away from the SJO airport. We found a free shuttle from National at the rental car kiosk in the airport. If you pick up outside of the airport, you avoid a large airport pickup tax. We also used promo code “MEMPHIS” for 10% off, prepaid with a Visa Signature credit card for another 10% off, and declined the LDW insurance. Car rentals require both SLC and LDW insurance. However, you can decline the LDW if you have a credit card that covers it, and you print out and bring the credit card agreement. My Capital One Venture is a Visa Signature, so we paid with that. The Prado was awesome, and we only paid about $340 to drive it for a week. We put 850 miles on it! 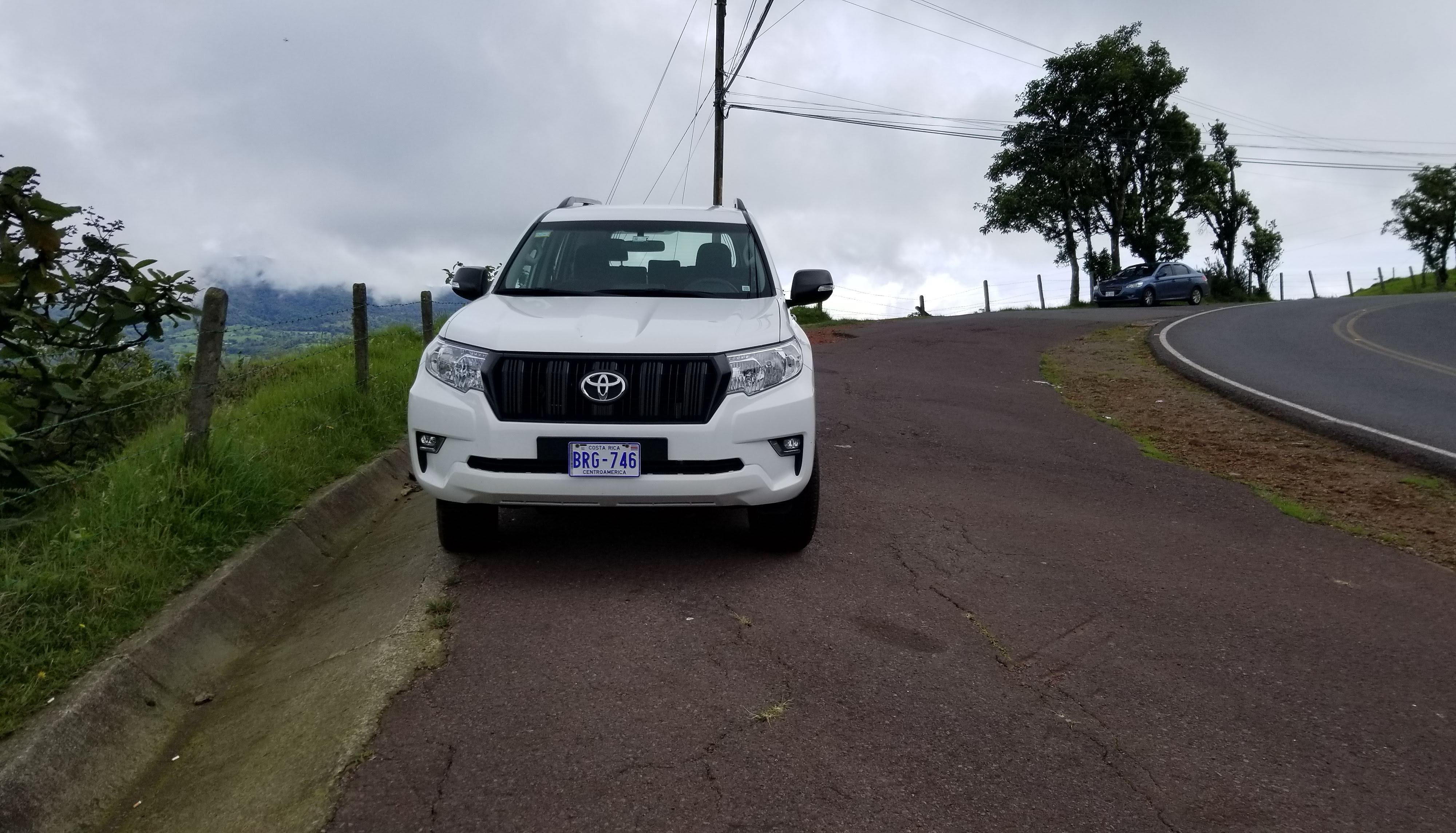 Landed in San Jose, got our rental car, checked in to Apartotel La Sabana. It was so rainy, so we did nothing but get room service and stay in. This place was $76/night, and was nothing fancy. The pool looked great (but it was rainy) and there was a sauna, but the room was cramped and not great.

Woke up and got a great Costa Rican breakfast at Apartotel La Sabana. That made the room worth it. We drove about 1.5 hours to the La Paz waterfall gardens, which was incredible. La Paz entrance was $125 for 2 people. We saw lots of birds, sloths, jungle cats, and beautiful waterfalls, and also had an awesome buffet. This might be our most recommended attraction we visited in Costa Rica. 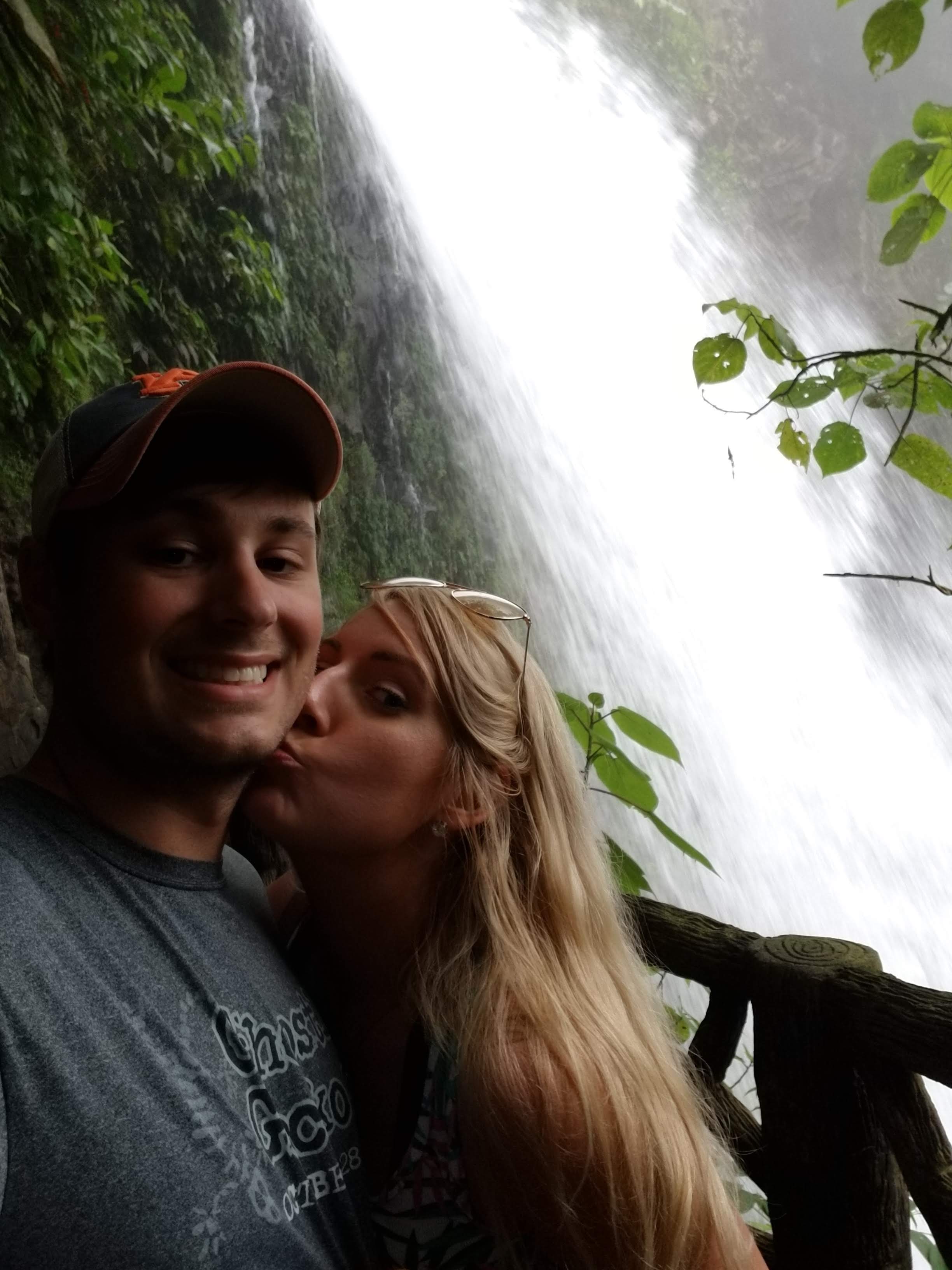 After a lot of hours here, we drove another 2 hours (stopping at McDonalds along the way) to the Heliconias Nature Lodge, and checked in to their Deluxe Treehouse.

We ordered room service, and enjoyed the awesome room! This room at Heliconias was $270/night.

Woke up and had another great Costa Rican breakfast at the Heliconias Nature Lodge.

Drove in to La Fortuna and did some white water rafting with the Desafio Adventure Company down the Balsa River. Afterwards, they provided a lunch buffet at their restaurant. This trip was $150 for 2 people, which we though was a great value. The guides and the food were great!

Woke up super early and went on a 6AM Bird Watching Tour, which cost $135 for 2 people and included some fruit. We saw lots of local birds (and dogs) and our guide was very knowledgable.

This close up picture of a bird is a Motmot, taken on a Galaxy S8 through a monocular.

Afterwards, we had another Costa Rican breakfast at Heliconias Nature Lodge. The staff here was super friendly. We checked out of this hotel and drove to the La Fortuna Waterfall. It was a ton of stairs to get there, but it was beautiful. It poured here, but luckily not until we were about ready to leave. The waterfall entrance was $36 for 2 people. 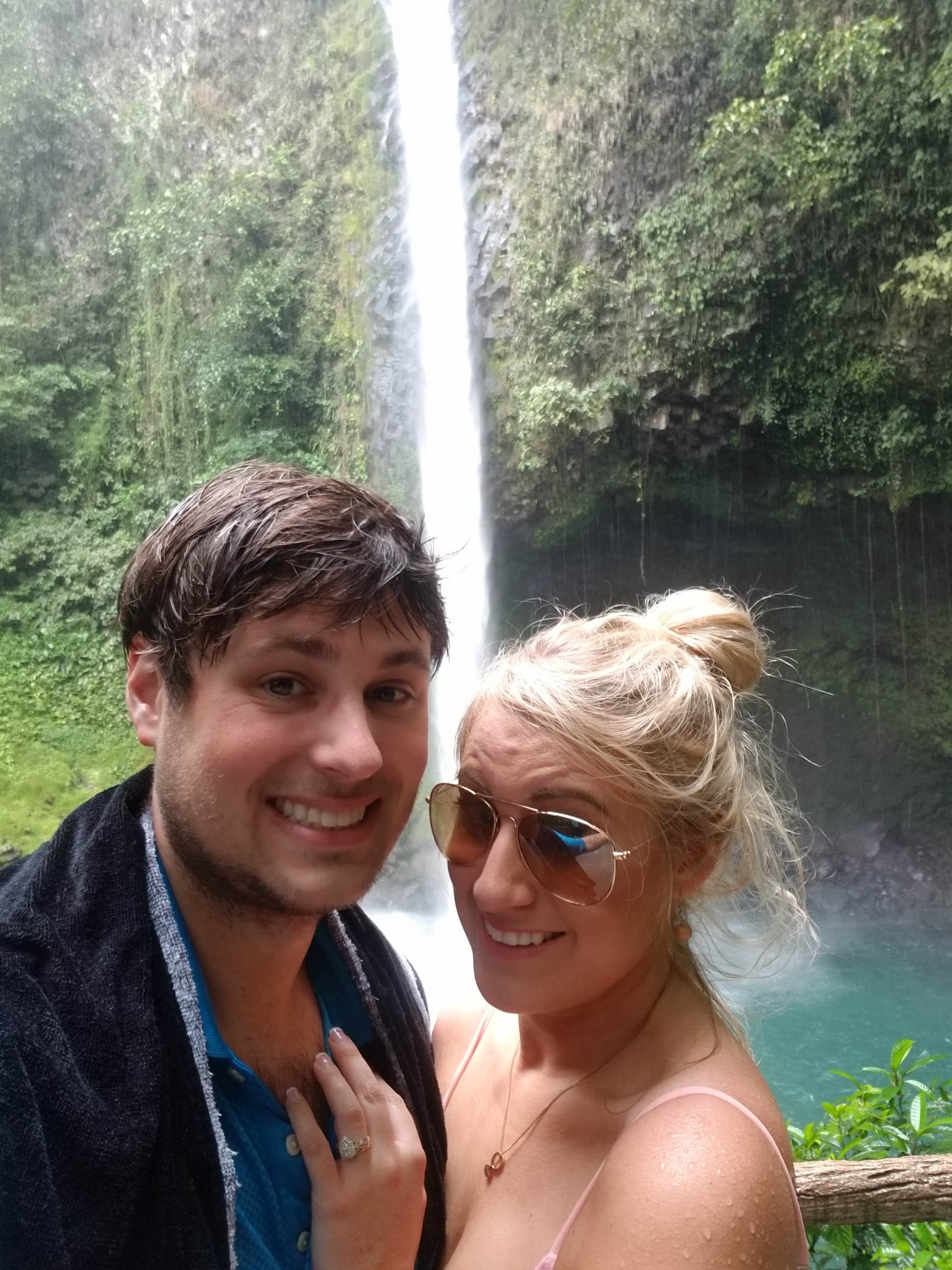 Then we drove to the Mistico Arenal Hanging Bridges Park. This place was actually closed for bad weather when we got there, so we got some food at their restaurant, and they opened about 30 minutes later. There are lots of hanging suspension bridges, great views of the Arenal volcano, and wildlife. It involved lots of hiking. We were already pretty exhausted from all the walking and hiking we had done the last few days, so we didn’t even see the whole park. We did see coati though, which we had never seen before! Mistico was $80 for 2 people. 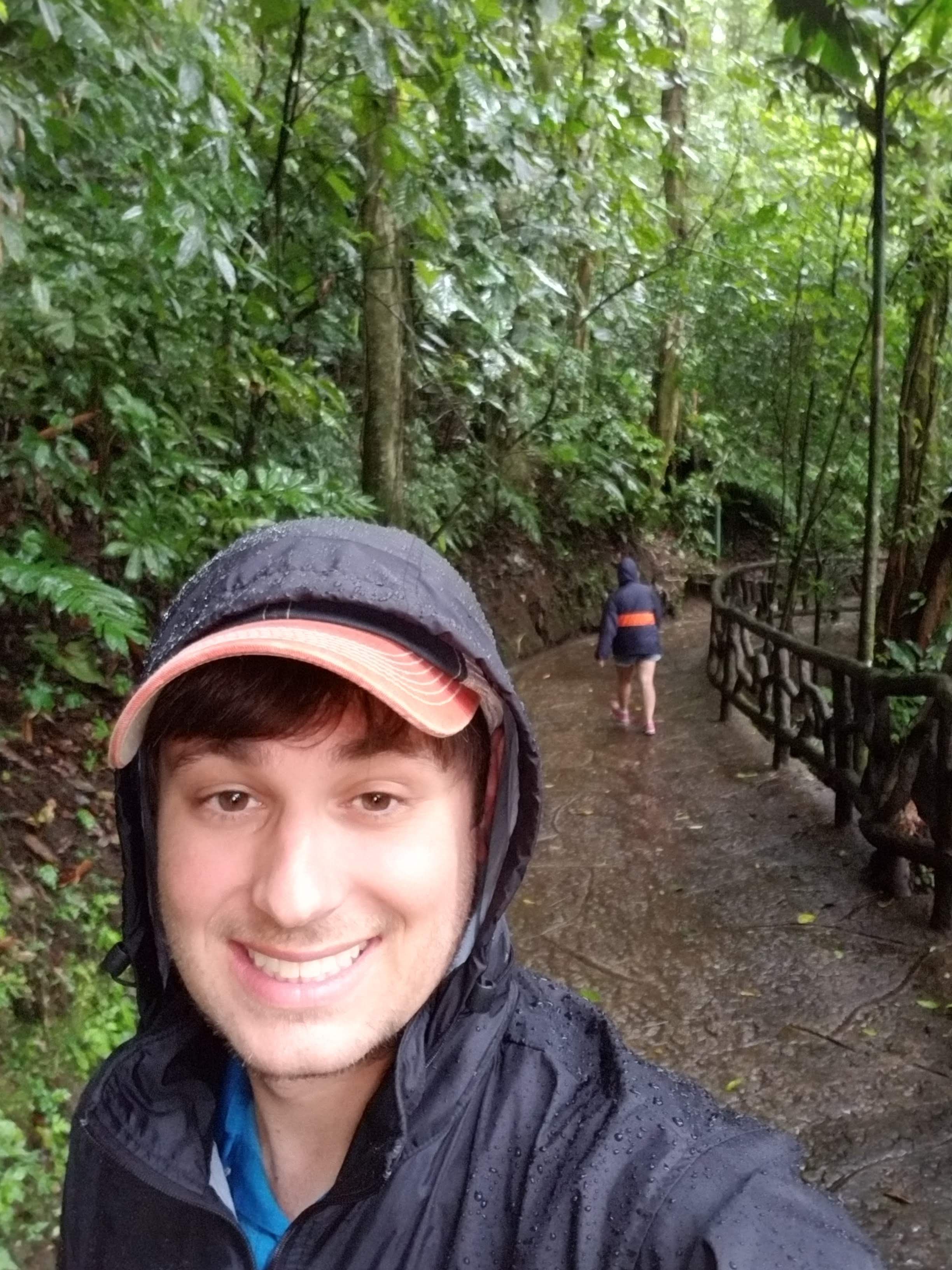 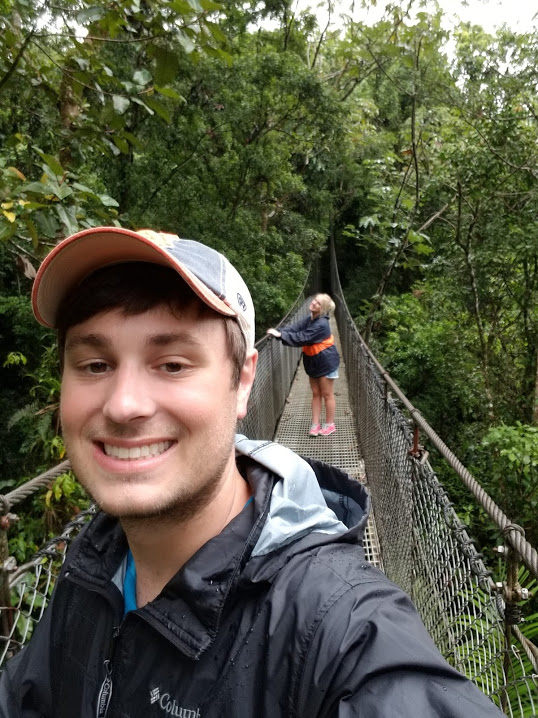 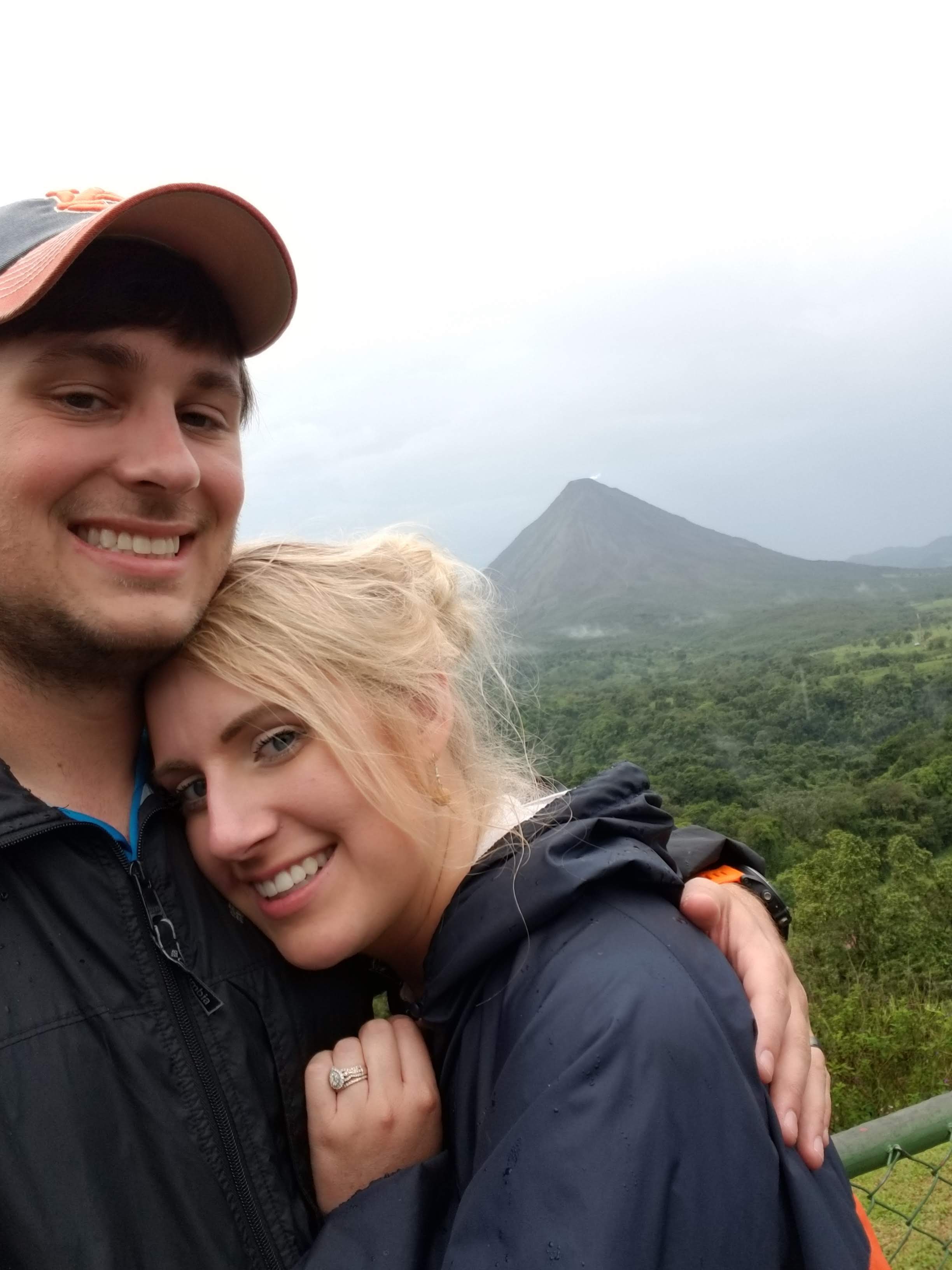 Afterwards, we drove to the Secrets Papagayo resort, about a 3 hour drive. Google Maps sent us down this insane mud road that was about 60 degrees uphill. Our car could handle it, but I could not. We turned around and took a detour, which added about 30 minutes. We got to our resort pretty late at night, and checked in to our room. They had prepped it for our honeymoon, with a sign and a bottle of champage!

This all inclusive resort was full of other couples on their honeymoons, and that was about it. Everyone had a honeymoon on their door! It was $430/night for 2 people, and of course included all of our food and drinks. So that’s what we did. We ate and drank and sat by the pool. We ordered room service, like 5 times. Then we went to their spa that night, my first time at a spa.

Day 6 - Drive back to San Jose

We just drove from Secrets back to San Jose this day. We stopped at another Taco Bell.

We stayed at the AC Hotel, which my Dad bought for us as a gift using points. Well, he is some sort of fancy membership level at Marriott, so they upgraded us to their penthouse suite and gave us free breakfast! It was probably one of the coolest hotel rooms we’ve every stayed in. It had a bedroom, living room, kitchen, 1.5 baths, and the biggest master bathroom I’ve ever been in. We walked around the area that the hotel was in, which is a new upscale shopping area. They also had a Lexus dealer with a LFA in stock. We ate dinner at PF Chang’s.

The breakfast buffet at the AC Hotel was great. We checked out of the hotel late, dropped off the car at National, then got a ride on their shuttle to the airport. We ate at Smashburger, which was crazy expensive. Like $20 for a burger. We also tried a few local beers in the airport. Landed in FLL later, then drove back to Melbourne to get a few hours sleep before work the next day! 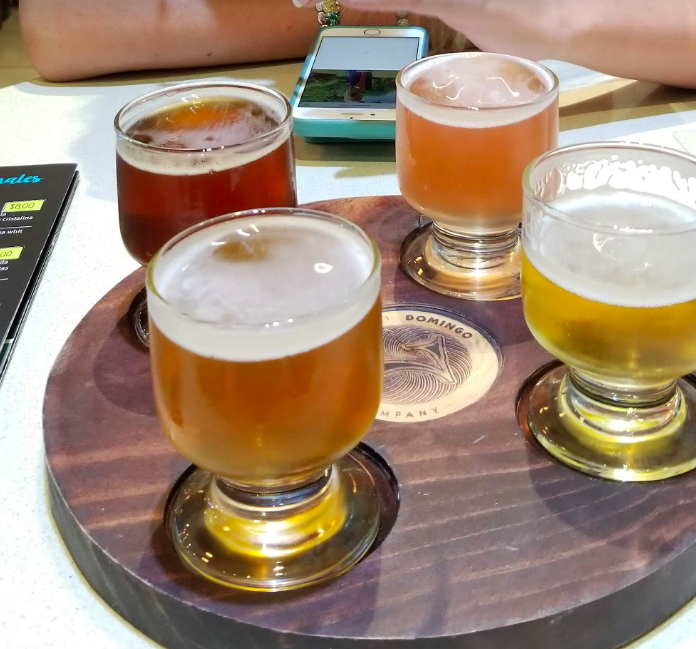 Other things to know about Costa Rica

Bring a credit card with no foreign transaction fees, we used my Capital One Venture Card for everything. The drive from Papagayo (west coast) to San Jose has toll roads you have to pay with cash. You can pay with USD and get change back in colones, the local currency. When driving, there are many 1 lane bridges. There is a sign on one side that shows which side has to yield, and the side without a yield sign gets to go without yielding. The roads are all very windy. Our rental took diesel, and all of the gas stations were not self serve. They had an attendant who would fill you up. People who work in the hospitality and tourism industry in Costa Rica are very nice and, in general, have very good English. We did not know much Spanish, but only had to bring out Google Translate once. Download Google Maps and Google Translate for offline usage fore you go if you have limited international data, like we did. We used 0MB of data the whole week, since each hotel had Wifi.